Now located in our new shed,  Most of the bodywork has now been completed. New door frames have been fitted, doors have been rebuilt and fitted, bodyside engine room doors have had all the rotton louvres replaced with ones recovered from bodyside grilles. The waistband has also been welded on to re-create the pre – HGR look. The loco body is now being filled and rubbed down for coats of primer and undercoat. A massive thankyou to out contract welders for an outstanding job. 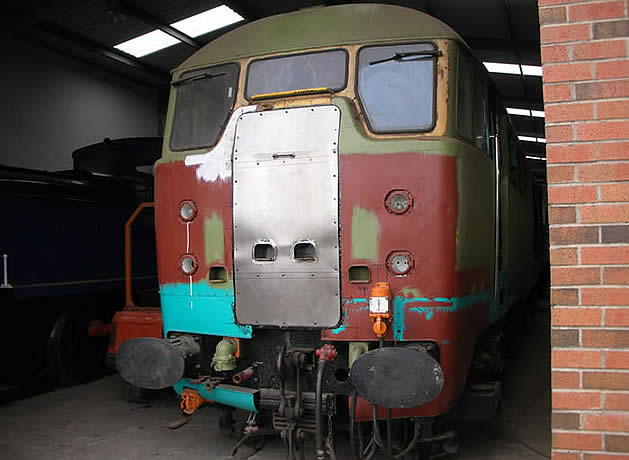 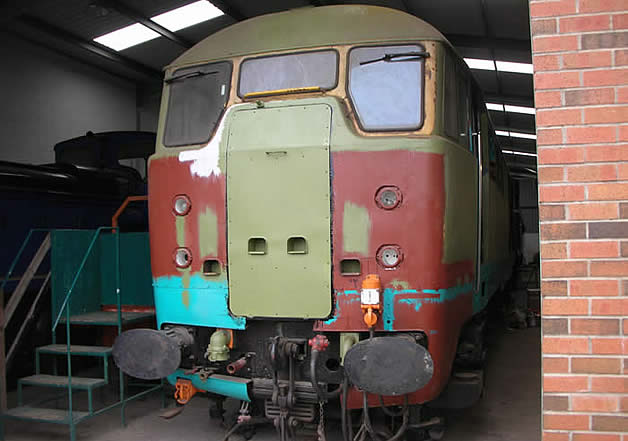 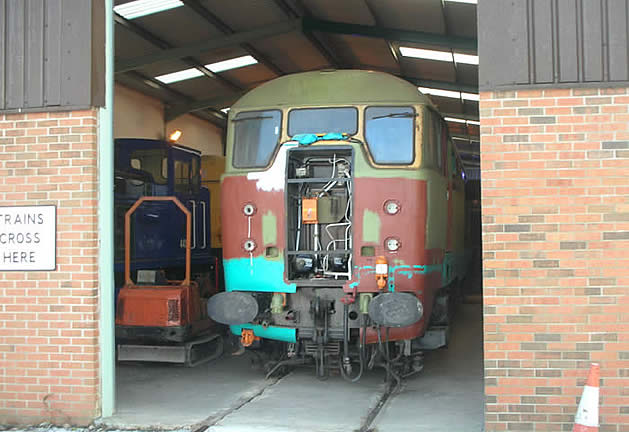 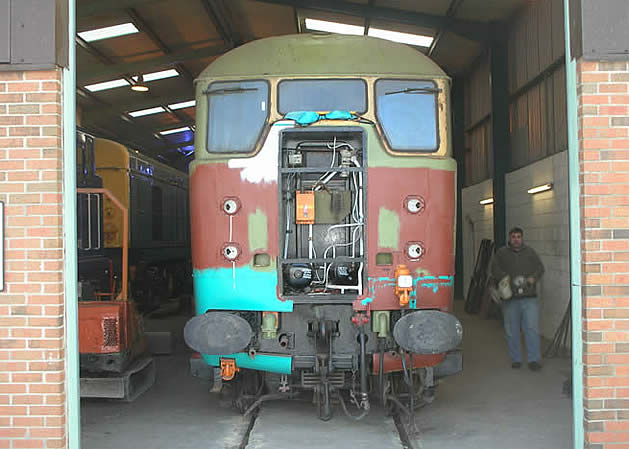 Twelve overhauled fuel injectors have been fitted along with pipes, trays etc. Rotten cab door areas at no 2 end have been cut away and new steel is slowly being welded in,

Work to the suspension tubes has been carried out on 2 wheelsets.

Both cab doors at no 1 end have been rebuilt.

WORK COMPLETED / IN PROGRESS DURING 2012

A poor but ‘usable’ set of batteries have been fitted to enable the testing of electrical circuits / machines. The fuel transfer pump and lubricating oil priming pump have both had their commutators cleaned up and brushes freed off and have been ‘run up’ off the batteries with no problems. The engine room lighting circuit has also been tested as well as the marker / tail lights. All are now ok following renewal of a few bulb holders. Following renewal of a fire detector holder and attention to the fire alarm relay and test switch, the fire alarm system now works correctly in both cabs. The fault lights for low fuel, high water temperature, low water level, earth fault & traction motor blower failure have also been tested in normal and fault conditions and are working correctly. An SSF unit has also been fitted at no 2 end.

Both no 1 end cab doors have been completely stripped down to enable renewal of the door drip tray and bases. No 2 end doors have been re-fitted and are in the process of having panels and glass fitted.

‘A Bank’ radiator shutters have been rubbed down and primed. ‘B bank’ shutters will be similarily treated shortly.

No 2 end electrical cubicle area has recently been overhauled and repainted. No 2 end traction motor blower was found to be defective and has been professionally overhauled and refitted. No 2 compressor & stand as well as no 1 exhauster were removed to enable access to the filter box recesses which were heavily corroded. These have now been rebuilt and the machines examined, repainted and refitted. All machines have been re-brushed. The bulkhead roof arch has also been replaced with a newly fabricated one due to corrosion.

The electrical cubicle has been overhauled / cleaned / painted and no 1 compressor examined / painted.

All the 21 air receivers have recently passed testing and have been refitted. The handbrakes, claws and underframe air hoses have also recently been connected. The battery boxes heve been brought out of store and have been overhauled, repainted and fitted.

Most of the bodyside skirting has been refitted along with three of the front end skirts recovered from 31225 many years ago.

No 2 end cab doors have been rebuilt with approx the bottom 8 inch of each door completely renewed including the drip trays. Both doors are now awaiting glass and external planels to be re-fitted. No 1 doors are to be similarily treated shortly.

No 2 cab floor / frame area has recently received major attention with new steel being welded in and new hardboard floors being fitted in the door areas.

The water header tank has been rebuilt due to heavy corrosion in its base and has now been refitted and connected to services.

The ETS recepticles have been relocated back to their original position. All wiring has been reconnected inside the fan shaft area circuit board. Engine room is 99% top coated now. 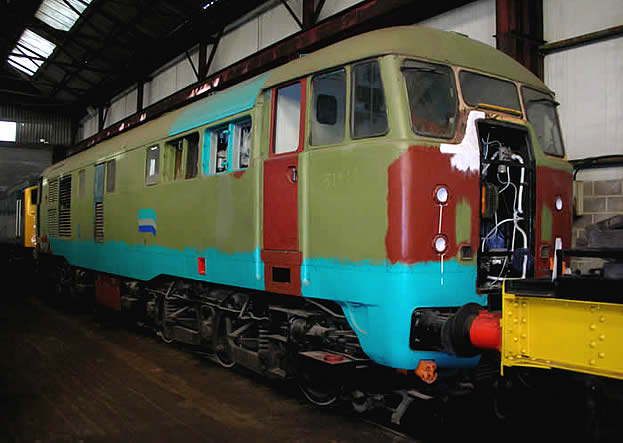 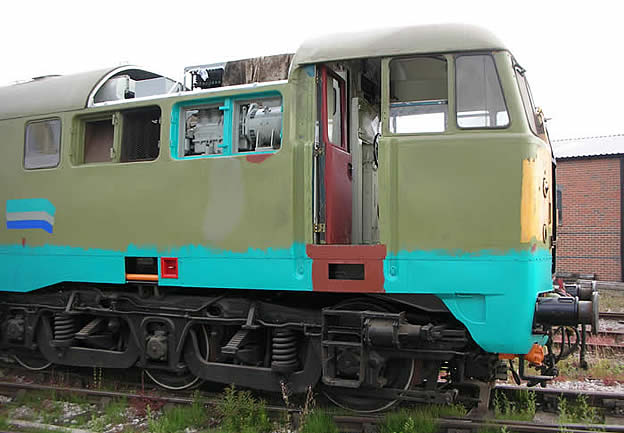 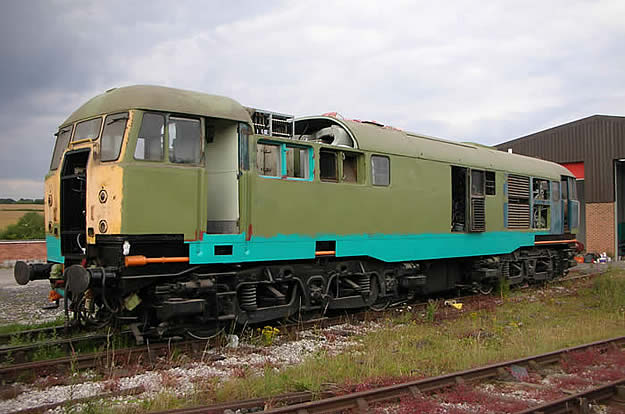 A view from the other side whilst waiting for the roof to be lifted on….14/07/11 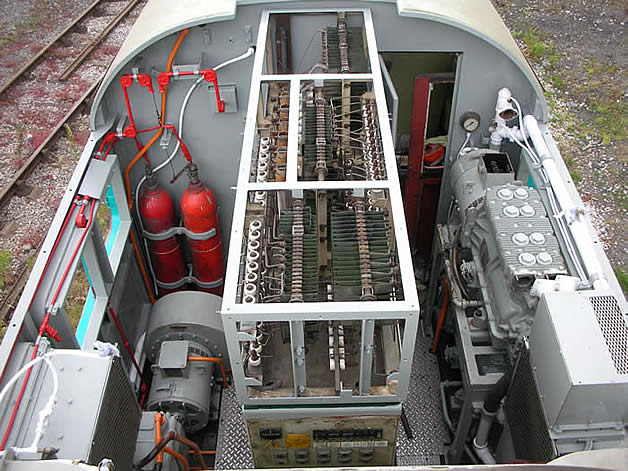 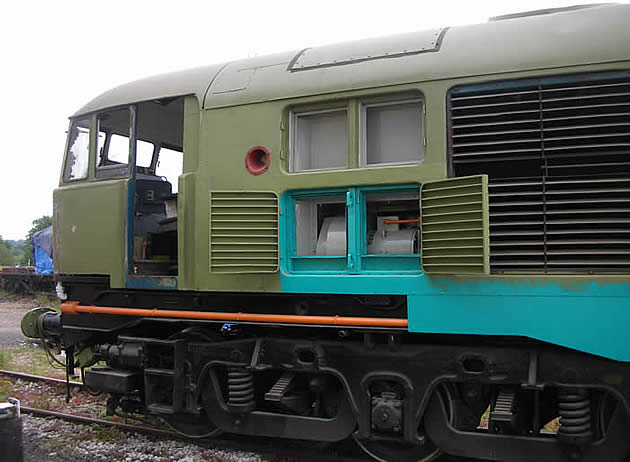 All traction motors have been washed out , cleaned up , re-brushed and their cables re-connected.

All cylinder heads , pistons, con rods and cylinder liners were removed from the engine block. A3 & B5 pistons were seized inside their liners and were lifted out ‘as one’ and separated with a hydraulic jack.

All the pistons were in excellent condition and did not require any work other than cleaning up and re-ringing. The con rods were also thoroughly examined.. A3 & B5 cylinder liners have been scrapped due to water damage but the other 10 have been re-used following honing.

The ‘exhaust roof panel’ and the ‘ electrical cubicle roof panel’ have been shotblasted / primed and the ETH cubicle has been examined, painted and refitted into the loco.

Nose end doors , louvres , cab doors and skirting has been removed for shotblasting / repair. Some of the corroded bodywork has been cut out ready for replacement. The nose end doors are to be replaced with newly fabricated ones.

The concrete block (ballast weight) has been removed and the boiler, which has been cosmetically restored, fitted in its place. The boiler water tank (ex 31123) has been shotblasted, painted and fitted into 31418. Three corroded air pipes in the boiler room have been replaced and the boiler / radiator area cleaned, primed and top coated. The boiler area roof section has also been shotblasted, had corroded steel replaced, painted in primer and re-fitted. The emergency fuel tank along with the rad fan cowl have also been cleaned up, painted and re-fitted.

Work continues with the power unit and cutting out corroded steel and replacement which is now concentrating on the cab doors which require re-building. 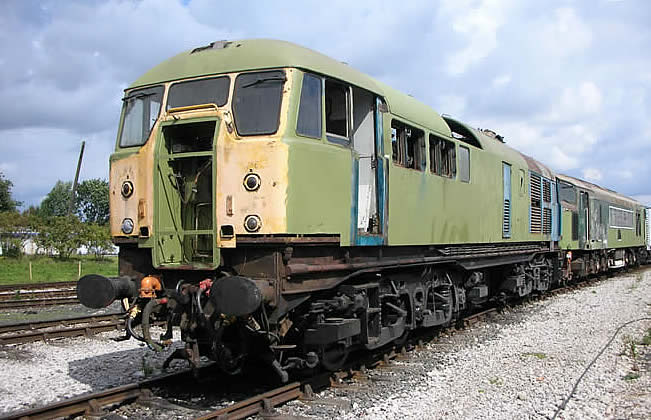 All skirting has been removed and shotblasted. Most sections will require repairs. Both nose ends have received a thorough cleaning , rubbing down and priming. 21/08/08 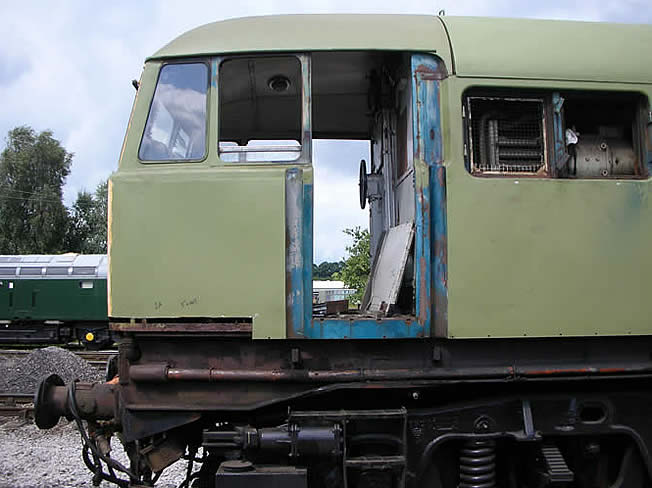 Both no 2 end cab doors have been removed for rebuilding and the cabs are stripped out. Corroded steelworkhas been cut out ready for renewal. Many of the filter box recesses will have to be completely rebuilt as a result of severe corrosion. 21/08/08 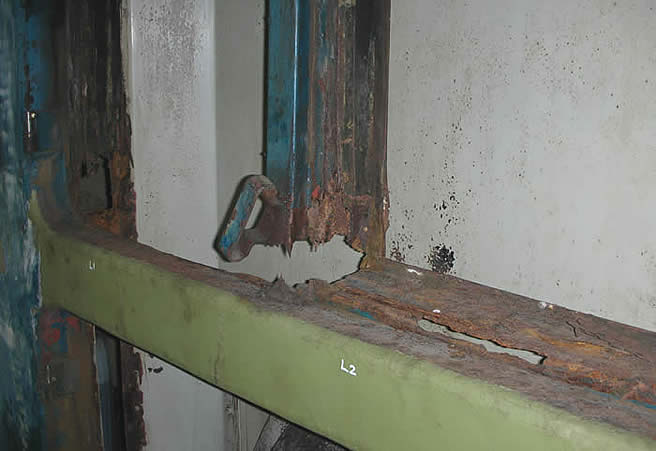 ‘BEFORE’ ….. Serious corrosion around the no 1 traction motor blower air intake is seen here. Most of what ‘should be there’ has completely disappeared and will therefore require rebuilding. 23/08/08 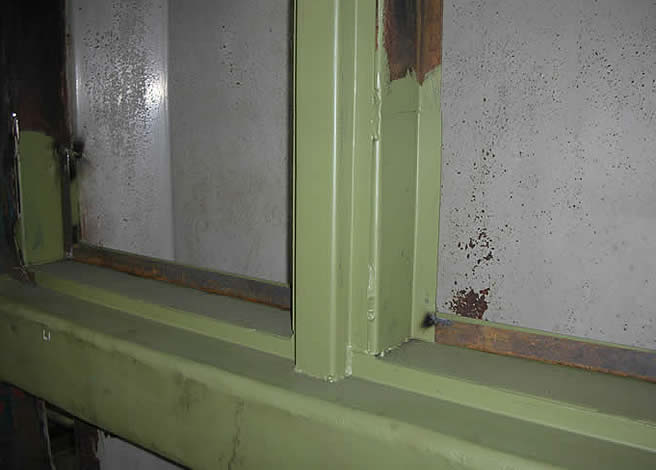 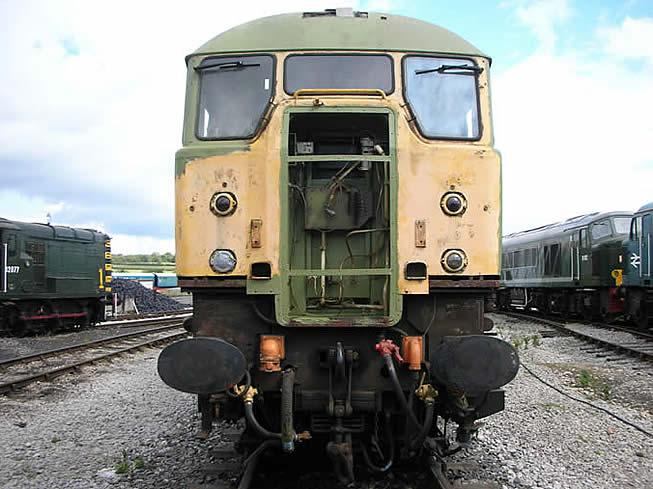 A view of no 2 end cab showing replating work in progress. The roof vent and nose door bases are being rebuilt and new steel will be cut and welded in below the marker lights. The nose end has been cleaned, rubbed down and primed . 21/08/08 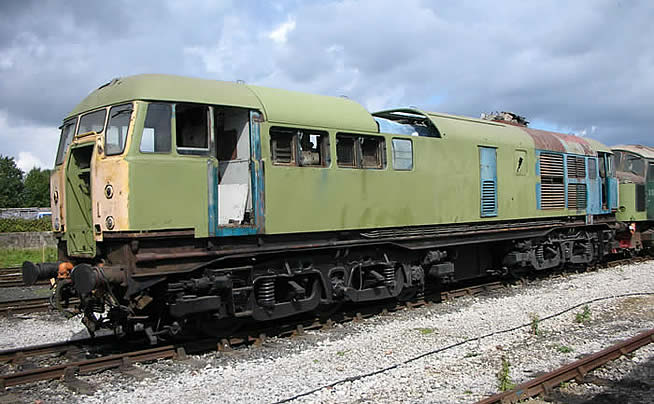 All of the removable roof sections have now been shotblasted and painted apart from the ‘boiler roof’ . Both battery boxes have been removed for overhaul and to gain access to the fuel tank. The fuel tank will in turn be removed to enable inspection and testing of the air receivers. 21/08/08 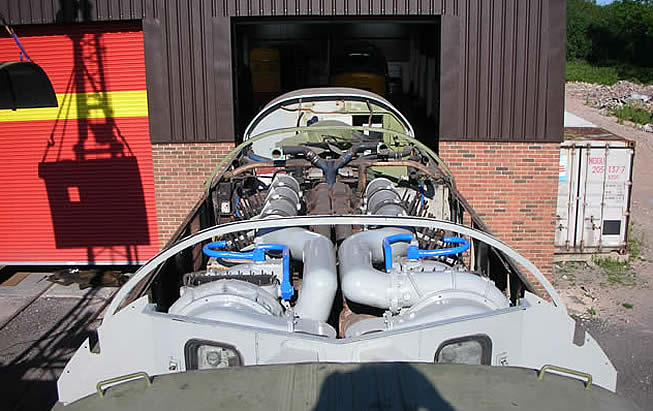 The ‘Exhaust roof’ is about to be fitted following replacement of the ETH cubicle, generator bulkhead and turbo manifolds……a major step forward ! . 31/05/09