Operating a Class 31 with an operable steam heat boiler was most certainly on the agenda from day one ! , indeed we took ownership of a Spanner Mk 1 boiler long before we actually got our hands on a loco !

Wanting to recreate the ‘steam heat experience’ we obviously required a boiler , preferably with pumps , electrical cubicle , float switches , water & fuel tanks. It was 1990 and at that time we hadn’t discovered 31162 ( which had a boiler fitted ) so we felt it prudent to acquire everything we needed for the future. There were still a few 31s with complete but isolated boilers running around, so the situation wasn’t critical. In early 1991 we examined 31225 in Doncaster Works which was awaiting breaking. Being an ex Stratford / Immingham steam heat fitted machine she still a boiler and in superb condition. Everything was there and in reasonable condition, except for the water level gauge which was missing . These were often removed by steam preservationists as they were BR standard. 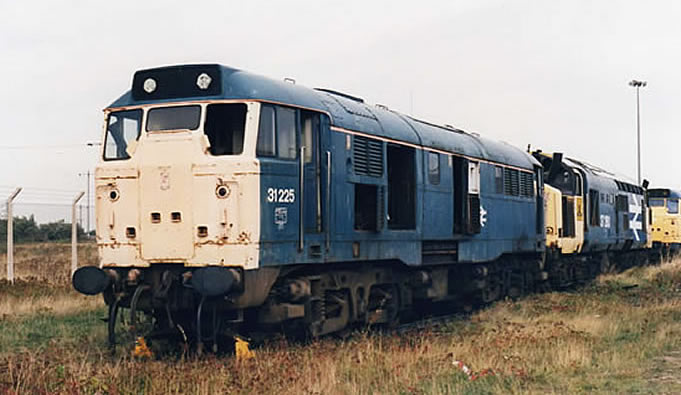 By chance we had some of our shareholders working at ‘ The Plant ‘ so once we expressed an interest we managed to get 31225 moved inside the shops for the all the steam heat equipment to be removed. The only bit we didn’t get was the chimney and roof panel. At the same time the cab end skirting was removed at both ends for future use, in fact it will be now be used for 31418. Procurement was contacted at Derby and we made an offer. Negotiations lasted 14 months ! but eventually our first offer was accepted which once the VAT was added came to £313.13 !

At that time , our chosen Railway was not the MRC but Peak Rail , so over 3 days at the end of March 1992 it was all removed to Darley Dale. There , over many , many weekends , the boiler was stripped down to a shell , its steel work prepared , primed and top coated several times with ‘ heat resistant ‘ paint. All the equipment was removed to Cleethorpes to be overhauled by ourselves. Following some ‘developments’ at Peak Rail , it was decided to look elsewhere for a base , which is when the MRC stepped in…… and during March 1994 the boiler was moved to Swanwick. As by that time we had our eyes on 31162 which had a water / fuel tank in situ , we took a gamble and scrapped the tanks at Darley Dale. Both tanks if needed could have been manufactured anyway. Work continued on the pumps , float switches , burner , electrical cubicle but the actual boiler restoration took a back seat whilst our new arrival 31162 was worked upon. 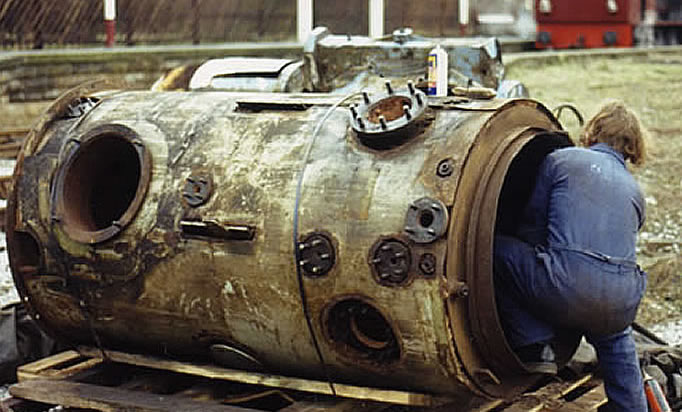 Working on our newly arrived boiler at Darley Dale…1992.

The boiler wiring , train heating pipe etc were given a thorough examination and on Saturday 17th June 1995 the main steam pipe flange in No 1 end was blanked off and the steam pipe pressurised to 55 PSI, thankfully no leaks at all. We now needed to remove 31162’s boiler and tanks so over a couple of days in early November 1995 , everything was undone ready to lift out.

Friday 24th/Saturday 25th November saw both the tanks & boiler lifted out in major exercise which involved 25321 and the permanent way department steam crane. This boiler would become our spare , just incase. The fuel tank as expected was in superb condition and following cleaning out , was repainted and stored for re-fitting. The water tank was a different matter altogether ! To be honest we’d have probably been better making a new one…… the base was rotten and the baffles had disintegrated. Over the next few months , an access hole was burnt out , all the debris removed , tank cleaned out and new baffles welded in. The floor was renewed and the access hole welded back up. This was a major job ! 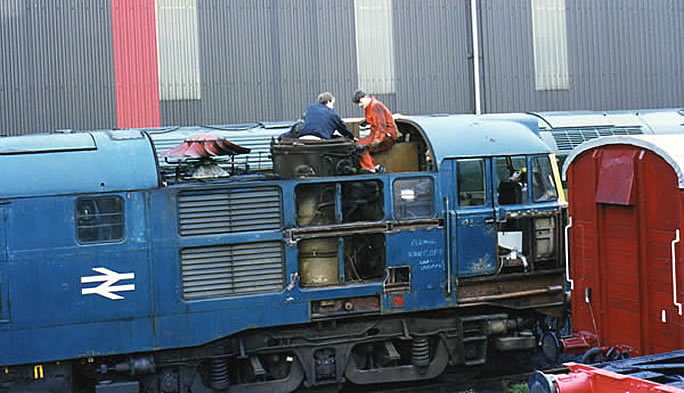 It wasn’t until late 1996 when work re-commenced on the boiler and the MRC boiler Inspector visited. Thankfully he was very happy with its condition , plate thickness and tubes , however a minor amount of wastage around the mud hole doors / water space gave him cause for concern. He was however quite happy to hydraulic the boiler to prove the tubes ( test was fine ) providing work was carried out on the wastage.

We managed to contract the very local ( and rail connected to Swanwick ) Butterley Engineering to carry out the rebuilding , which resulted in the lower 6 inches including mud holes and baseplate being completely renewed . We actually moved the boiler up to their works by rail ! In the meantime, because some of the wiring on the burner motor was to earth, the motor was sent away for an overhaul and soon returned looking as good as new.! Once repaired , on the 14th April 1997 the boiler was returned ( by rail once more ) to Swanwick where a few days later , to our relief , it passed its hydraulic test with flying colours.

Whilst all this was going on , the boiler compartment was given a thorough clean and repaint , some missing wiring replaced and all other wiring traced and tagged. The emergency shutdown switches were overhauled as were the alarm lights.

Following its thankfully successful hydraulic test , new firebrick and insulation was fitted followed by the repaired casing. Once painted, the overhauled float switches, water pump & motor, safety valve / burner / fuel pump & electrical cubicle were re-fitted and on Sunday 15th June 1997, 31225’s boiler was fitted to 31162 with the tanks. Over the next year, in between working on 31108 & 31271 work continued refitting more parts back to the boiler and connecting and testing the wiring and circuits. 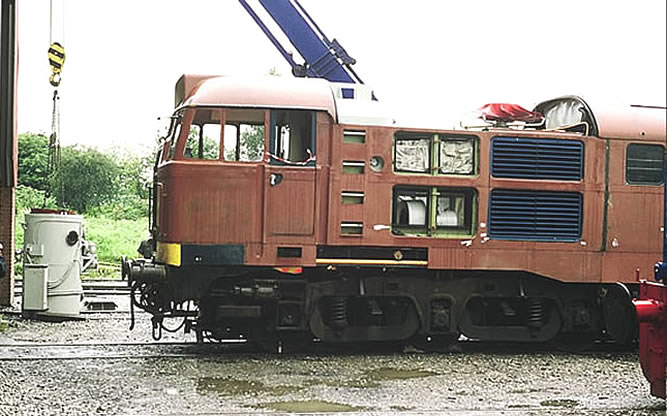 Underneath the loco , 31162’s boiler fuel feed pipe had been removed in BR days so a replacement as well as the boiler flue was recovered from 31223 in 1994 , and were duly plumbed in during late 1998. Nearly there now …! Following extensive testing of all the failsafe circuits , on Sunday 3rd January 1999 , water & fuel were added and the ‘ button ‘ pressed. In fact it’s actually a switch.! but to our joy at 1400hrs , the boiler sprang into life and steamed for 3 hours ! Only 2 faults developed , one was the fuel solenoid which decided to go ‘ open circuit ‘ after 2 hours and the other being the fuel atomiser which started to leak badly near the nozzle. Having plenty of spares , these were replaced and repaired later. 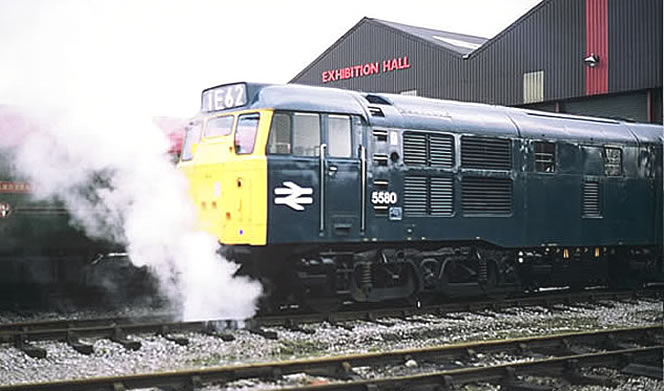 A visit from the Insurance company on Thursday 21st January saw 31162 steam for 2 hours without fault and be credited with the necessary 14 month paperwork. We’d done it , a 31 steams again !

31162’s first ( or it should be 5580’s ) first passenger trains ‘steaming’ were over the weekend of 6th / 7th February 1999 at Butterley and following the 2 days it was pleasing to report no problems… ‘ hellfire ! ‘. Since that historic day the boiler has been re-certified every 14 months and has never let us down ….yet ! Everything has worked as it should. Fittings such as the safety valve , float switches, pressure switch have been removed for testing / re-calibration each year in line with current safety standards.

Unfortunately time ticks away so fast , and on 7th January 2008 , the hydraulic ticket expired so once again a thorough overhaul looms. During this overhaul , the tubes will be replaced. 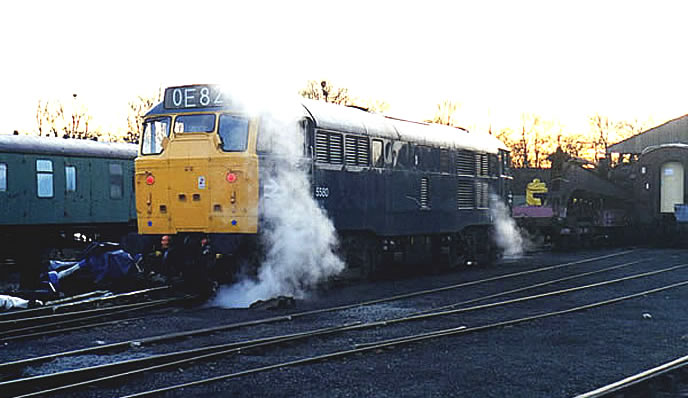 More steam in Golden Valley during a photo-stop on a birthday charter 17/01/01.

SPANNER Mk 1 BOILER. A BIT OF HISTORY & HOW IT WORKS

Spanner Boilers Ltd hail from Bracknell in Berkshire and were responsible for producing 3 types of boiler for British Railways : Mk 1 , Mk 2 & Mk 3.

The Mk 2 & 3 were smaller than the Mk 1 version and were fitted to deltics and class 47’s respectively. The Mk 1 boiler was installed in all class 30 / 31 ( or Brush Type 2 ) as well as Class 28 ( Co Bo ) and some early NBL locos eg class 29. Later on , some boiler vans used Spanner Mk 1’s removed from locomotives. Spanner used ‘ Swirlyflow ‘ tubes for their vertical oil fired Mk 1 which as the name implies , makes the hot exhaust gases swirl round in the tube , keeping the heat longer in the tube , therefore being more efficient. Two other companies ‘ Clayton ‘ and ‘ Stones ‘ also produced boilers for British Railways. 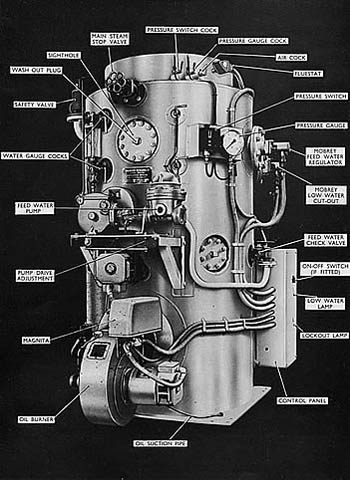 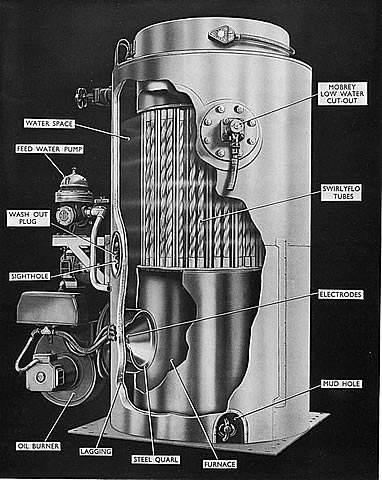 Drawings of a Spanner Mk 1 boiler.

If the boiler is in full working order with plenty of fuel and water, this is ‘ basically ‘ how it works:

Once the boiler switch is closed , the water pump will run and will draw water from the tank and commence filling the boiler. Once the water level reaches the low water cut -out , the Mobray float switch contacts will energise the burner motor. A fan is attached to the burner which blows air into the furnace to feed the fire. The fuel pump is also driven from the same shaft. The fuel atomiser and electrodes are situated within the burner. The burner is a converter and produces 240V AC which gets stepped up to 10000V AC in the transformer which produces a spark across 2 electrodes which instantly ignites the atomised fuel being sprayed. The magnita pictured in the illustration was removed and replaced with a transformer in the early 1980s.

The heat produced from the furnace passes through the tubes , heating the water which soon turns to steam. The water pump continues to run until the feed water regulator Mobray float switch is operated which stops the pump running . This float switch operates the water pump accordingly as the level rises and falls…..with the low water cut -out switch shutting down the boiler if for instance , the pump fails or there is insufficient water in the tank. The fluestat situated in the chimney stack will shut down the burner within a few seconds if it cannot detect heat . Under normal conditions when it does detect heat , it will operate to switch off the spark at the electrodes , the flame (now established and kept going by the fuel and air) will continue to burn.

Once the steam pressure has risen to 60 PSI , the pressure switch operates to switch off the burner , likewise when the pressure drops to 40 PSI it will run the burner again. The safety valve will lift at 75 PSI . The boiler if maintained correctly will generally ‘ look after itself ‘ when running however a careful eye needs to be kept. Water level can be monitered with the side glass and should there be an urgent requirement to shutdown the boiler , this can be safely done with a switch in each cab.

At the end of operation , once the steam pressure drops to 10 – 15 PSI the boiler must be ‘ blown down ‘ to remove sediment from the water space. This is achieved by opening the blow down valve .Once all the steam has vented , the boiler switch is opened to effect a complete shutdown.

Our boiler at Darley Dale during restoration in 1993 and more recently in 31162 in working order.