Now safely delivered to Butterley, the real work could now begin…..31162 was examined and started up on Saturday 15th January , the day following arrival , and taken on a couple of light engine test runs to Riddings and back. Thankfully no major problems were thrown up but several minor snags such as a weeping LP fuel pipe , A3 Injector not always firing and an intermittently operating speedometer were rectified.

Obviously we needed to commence the renewal / repair of 31162’s ailing bodywork but in the meantime we undertook a thorough examination of all equipment. Auxilliary machines were checked over , comms cleaned up & re-brushed , electrical cubicle examined , disintergrating relay coils renewed and controller contacts re-aligned / cleaned up. Minor oil leaks on the power unit were sorted , drain wells unblocked …and moving down to the bogies …., traction motors cleaned up and re-brushed. Finally , motak levels were restored and everything requiring greasing was ‘ greased ‘. There wasn’t a stone unturned…!

31162’s first passenger runs on Saturday 30th April ( a Shareholders special ) were a huge success with no problems at all. In all , 4 round trips were completed. July saw 31162 make her public debut at the MRC Diesel Gala over the weekend of 23rd/24th July. No problems on the Saturday but unfortunately on the Sunday morning Nos 2 + 4 traction motors had to be isolated as a result of a power to earth fault. We however continued in service. Later investigation and meggering proved all was fine with all the circuits…..however a large quatity of water had been present ( the tide marks were there ! ) in one of the junction boxes probably as a result of a loco body washing exercise on the Saturday evening of the Gala……at least all was ok now though..! 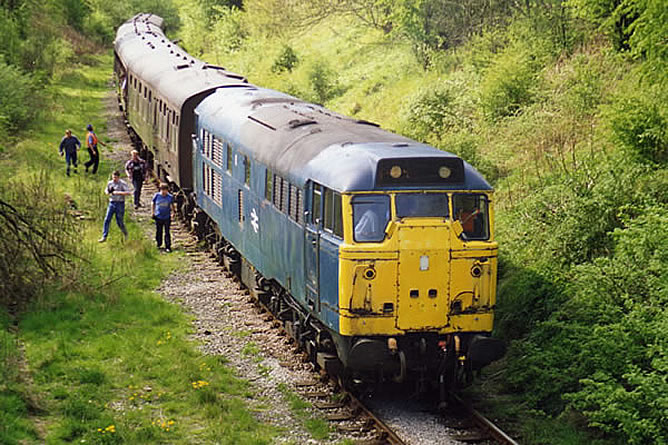 Soon following the Gala , 31162 entered the shed at Swanwick Jct for a bodywork overhaul of No 2 end Cab. This involved the complete renewal of all steelwork from the nose-end door , right around to the cab handrails on both sides. Both cab doors were completely re-built. New cab door and window pillars were constructed as the originals had corroded away , and new drip trays were made. A new nose door base was created as well as new handrail recesses. We even used an original cab-corner template to get the correct curveture , refurbs are very different. Internally , the cab roof was replaced , headcode winding gear removed and overhauled , all gauges and fittings removed for calibration / overhaul. The cab was then prepared and painted after which all the equipment was re-fitted…….it all sounds so easy..! 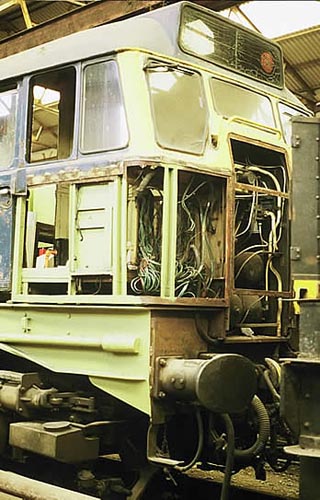 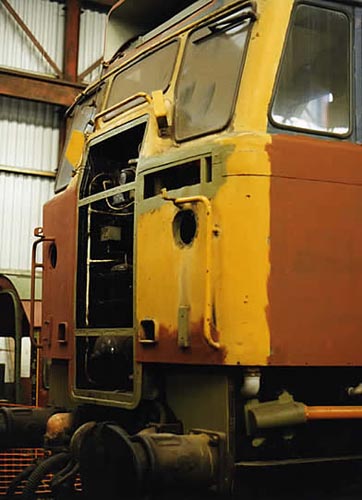 31162 was released back into traffic in time for an appearance at the 1995 Spring Diesel Gala where she enjoyed a faultless weekend. Various running days were subsequently completed with only one hiccup , that being Start Contactor No 1 ( S1 ) Interlock arm which had split from its top thread. This was soon replaced with one from our newly arrived demic 31108. Following the Autumn Diesel Gala 1995 , 31162 was once again withdrawn from traffic , this time to enable the Spanner Mk 1 boiler to be removed as well as the water and fuel tanks. This was successfully achieved over 2 consecutive days Friday / Saturday 24th / 25th November 1995.

Once again in the shed at Swanwick Jct , a thorough overhaul of the boiler compartment was in full swing as well as the overhaul of No 1 end Cab. Steelwork was renewed as in the previous work on No 2 end except this time , the drivers side panel was retained due to its superior condition. All corroded and damaged plate was removed from the remainder of the loco and new steel fabricated and welded in. Boiler plumbing was repaired and wiring was checked / renewed as necessary. 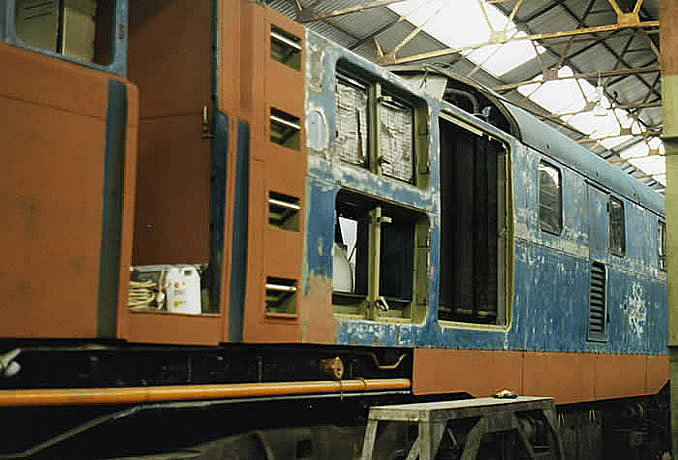 All the above 3 photos show work to No 1 end cab , boiler area and general bodywork at Swanwick Sept 1996. 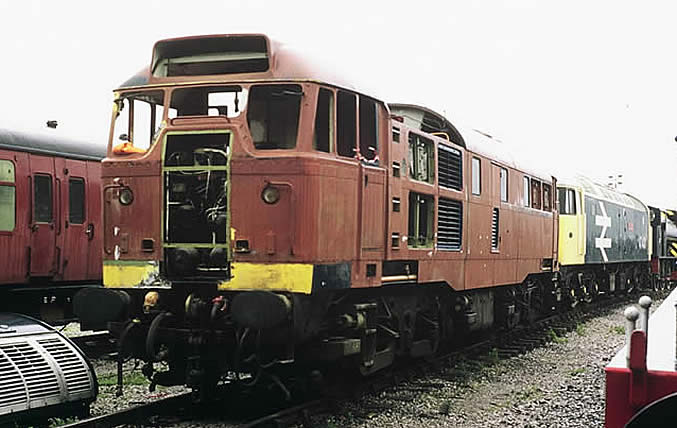 Work also included the fabrication of authentic bodyside footsteps and overhaul of the boiler roof. Work was progressing well with the overhaul of the replacement boiler ( ex 31225 ) and equipment then following refitting of the cladding and pumps / pipework etc, the boiler was duly installed inside the loco along with the water and fuel tanks on Sunday 15th June 1997. This second stage of the overhaul had been ongoing now for approx 20 months and we were nearly there..! The waistband was restored to the bodysides , all louvres and radiator shutters were shotblasted , the skirts were refitted , replica nose end doors fabricated and fitted and the bodysides rubbed down , filled and primed. Painting in BR blue was completed and mid 1970s style pre-TOPS numbers and arrows finished off our absolutely immaculate and authentically restored Brush Type 2. 5580 was born and just in time for the September MRC Diesel Gala 1997..!! 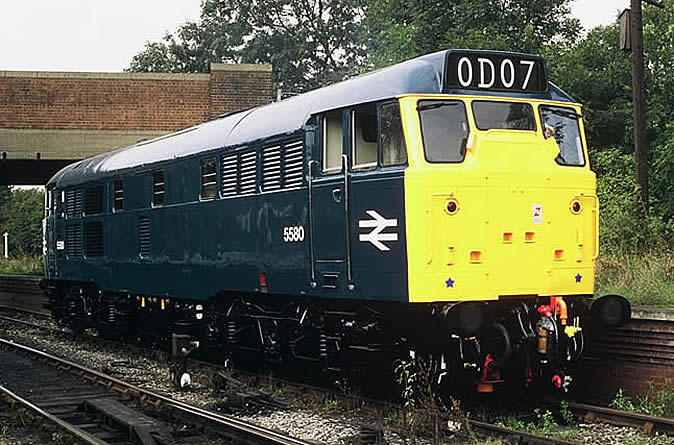 A thorough check of the engine and electrics prior to starting thankfully ensured a fault free Gala and following this event , work continued over the winter on the engine room with much de-greasing , rubbing down , priming and top coating…….

Well that’s really it …. regular preventative maintenance is regularly carried out , and apart from a power control relay ( PCR ) burning out prior to a days work, a Traction Motor Contactor defect and the odd air leak here and there , up to now …she’s been as good as gold !

31162 was taken out of service from July until November 2007 for body work attention again… and a repaint. It was getting on for 10 years since the bodywork was rebuilt and she’d never had a repaint since…! She was looking extremely weatherworn , an image re-creating the final years of the un-refurbished examples , however many holes had started to appear so some re-plating was necessary. The sea air on the North Norfolk coast not helping matters at all…….. 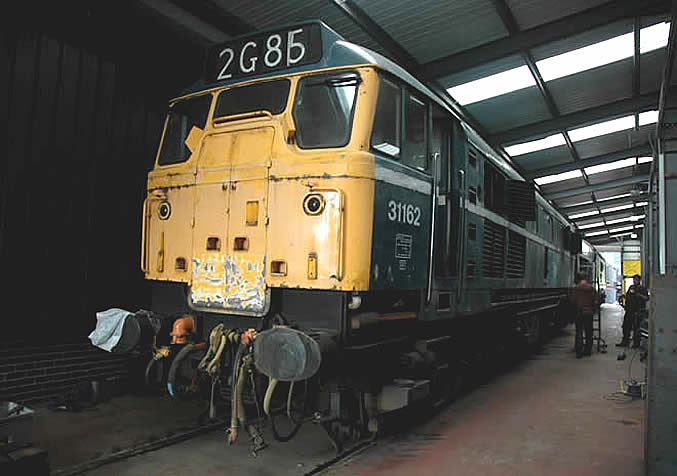 Finally in the shed at Weybourne for much needed bodywork attention..09/07/07 photo M Skidmore 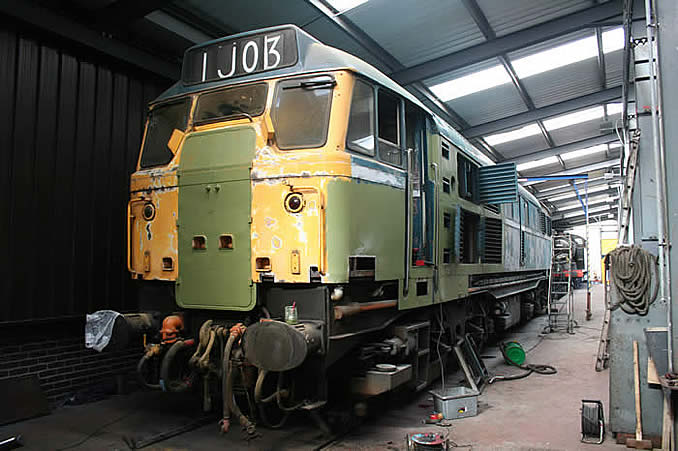 Following a few of days of hard graft , corroded pieces of steel have been cut out and major inroads to the 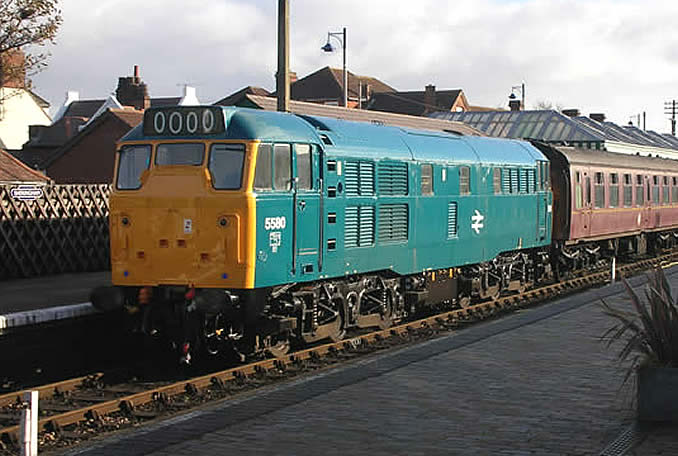 It is planned in the longterm to carry out a power unit overhaul of 31162 to ensure the reliability and indeed the future of this remarkable locomotive.